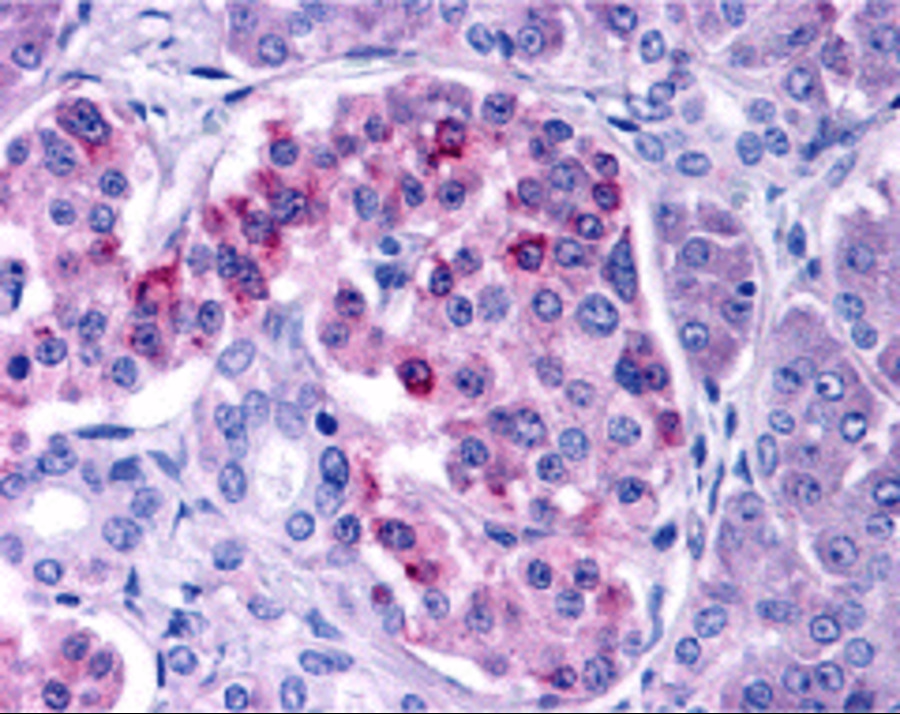 Description Immunohistochemistry Validation of IKK epsilon in Human Pancreas Tissue
Immunohistochemical analysis of paraffin-embedded human pancreas tissue using anti-IKK epsilon antibody (2329) at 10 ug/ml. Tissue was fixed with formaldehyde and blocked with 10% serum for 1 h at RT; antigen retrieval was by heat mediation with a citrate buffer (pH6). Samples were incubated with primary antibody overnight at 4C. A goat anti-rabbit IgG H&L (HRP) at 1/250 was used as secondary. Counter stained with Hematoxylin.

Description Immunofluorescence Validation of IKK epsilon in HeLa Cells
Immunofluorescent analysis of 4% paraformaldehyde-fixed HeLa cells labeling IKK epsilon with 2329 at 20 ug/mL, followed by goat anti-rabbit IgG secondary antibody at 1/500 dilution (green) and DAPI staining (blue).
Additional Information
Handling
Storage Store at 2 - 8ºC. Do not Freeze.
Dilution Instructions Dilute in PBS or medium which is identical to that used in the assay system.
Application Instructions Immunoblotting: use at 1:500-1:1,000 dilution.