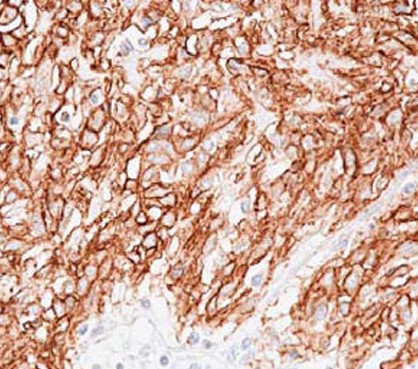 Description Immunohistochemistry: Use at 110ug/ml on paraffin-embedded samples. Antigen retrieval solution: 10mM citrate, pH 6 (boil slides by microwaving in antigen retrieval solution for 12 minutes). r Host Species: Mouse Antibody Class: IgG1 Preservatives: None. Available on equest. BACKGROUND DOG1 (Discovered on GIST1), also known as TMEM16A and ANO1, has emerged in recent years as a promising biomarker for gastrointestinal stromal tumors (GIST). It was originally discovered through microarray expression profiling analysis as a gene that is highly expressed in GIST, and subsequent immunohistochemical studies have shown its use in its diagnosis. DOG1 antibodies are more sensitive than KIT antibodies in detecting tumors of gastric origin, tumors with epithelioid morphology, and tumors harboring PDGFRA mutation. DOG1 immunoreactivity is rarely observed in other mesenchymal and nonmesenchymal tumor types. These results support the use of DOG1 as a biomarker for GIST. SPECIFICITY This antibody recognizes human DOG1. QED Bioscience, Inc. 10919 Technology Place, Suite C San Diego, CA 92127 Membranous staining of DOG1 in GIST
Additional Information
Handling
Storage This antibody is stable for at least one (1) year at -20C. Avoid multiple freeze- thaw cycles.
Dilution Instructions Dilute in PBS or medium that is identical to that used in the assay system.
Application Instructions