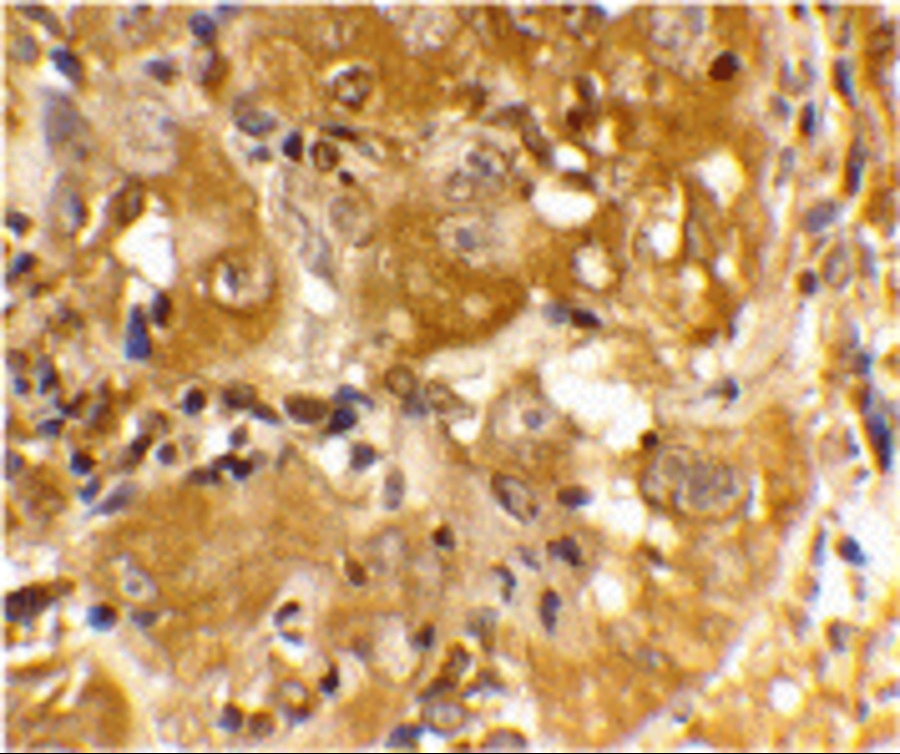 Description Immunohistochemistry Validation of BIM in Human Skin Cancer Cells
Immunohistochemical analysis of paraffin-embedded human spleen tissue using anti-BIM antibody (2414) at 20 ug/ml. Tissue was fixed with formaldehyde and blocked with 10% serum for 1 h at RT; antigen retrieval was by heat mediation with a citrate buffer (pH6). Samples were incubated with primary antibody overnight at 4C. A goat anti-rabbit IgG H&L (HRP) at 1/250 was used as secondary. Counter stained with Hematoxylin.

Description Induced Expression Validation of BIM in Mouse Hippocampus (Tsuchiya et al., 2011)
The induction of Bim protein was detected by immunohistochemical analysis of mice after i.h. injection of epoxomicin with anti-BIM antibodies. Sections from epoxomicin-treated animals exhibited cells staining positive for Bim expression within the NeuN-positive population of neurons in the CA1 of the ipsilateral side. In contrast, Bim-positive cells were absent within the NeuNpositiveCA1 neurons on the contralateral side.

Description Regulated Expression Validation of BIM in U266 Cells (Chen et al., 2012)
Immunoblot analysis was carried out to monitor protein expression of 3 isoforms (EL, L, and S) of Bim with anti-BIM antibodies. BIM expression was up-regulated by flavopiridol treatment, which was blocked by Cycloheximide in U266 cells.

Description KD Validation of BIM in Human Cell Lines (Chen et al., 2009)
Human leukemia (U937 and Jurkat) and myeloma (U266) cells were stably transfected with constructs encoding shBim or a scrambled sequence (shNC). Immunoblotting was preformed to monitor expression of Bim in these cells with anti-BIM antibodies. BIM expression was disrupted after shBIM knockdown.

Description Localization Validation of BIM in Mouse Macrophages (Ulett et al., 2005)
Immunoblots of subcellular fractions enriched for mitochondria and cytosol were used to determine BIM protein levels with anti-BIM antibodies in J774A cells. BIM is exclusively expressed in mitochondria
Additional Information
Handling
Storage Store at 2 - 8ºC. Do not Freeze.
Dilution Instructions Dilute in PBS or medium which is identical to that used in the assay system.
Application Instructions Immunoblotting: use at 1ug/mL.

Immunocytochemistry: use a 10-20ug/mL

Enduser should determine optimal concentration for their application.