Description Immunohistochemistry Validation of BACE in Mouse Brain
Immunohistochemical analysis of paraffin-embedded mouse brain tissue using anti-BACE antibody (2253) at 2.5 ug/ml. Tissue was fixed with formaldehyde and blocked with 10% serum for 1 h at RT; antigen retrieval was by heat mediation with a citrate buffer (pH6). Samples were incubated with primary antibody overnight at 4C. A goat anti-rabbit IgG H&L (HRP) at 1/250 was used as secondary. Counter stained with Hematoxylin. 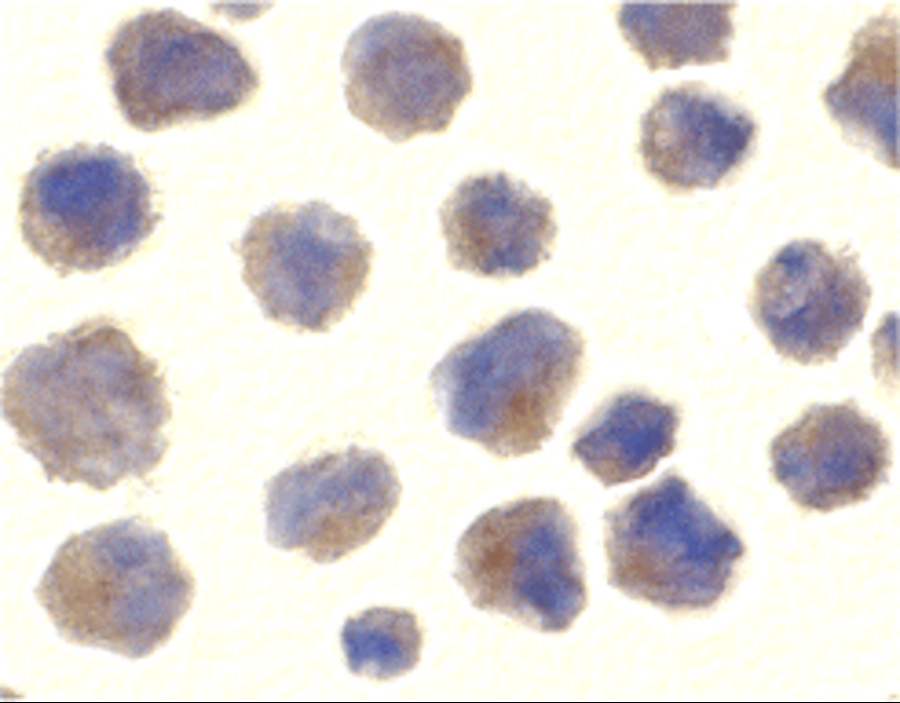 Description Immunocytochemistry Validation of BACE in 3T3/NIH Cells
Immunocytochemical analysis of 3T3/NIH cells using anti-BACE antibody (2253) at 10 ug/ml. Cells was fixed with formaldehyde and blocked with 10% serum for 1 h at RT; antigen retrieval was by heat mediation with a citrate buffer (pH6). Samples were incubated with primary antibody overnight at 4C. A goat anti-rabbit IgG H&L (HRP) at 1/250 was used as secondary. Counter stained with Hematoxylin.

Description KO and Overexpression Validation of BACE in Human and Mouse Brain and 293 Cells. (Singer et al., 2005)
Western blot analysis of the BACE1 (2253) antibody’s ability to recognize human and murine BACE1. The BACE1 antibody recognized both the mouse and human forms of BACE1. Lanes 1–4 are frontal cortex homogenates from human and mouse brains. Lane 1 is from a neurologically unimpaired aged human control case, lane 2 from a BACE1-deficient mouse, lane 3 from a nontransgenic mouse and lane 4 from hBACE1 transgenic mouse. Lanes 5–7 are lysates from HEK293T cells transfected with a plasmid vector expressing eGFP, mBACE1 and hBACE1, respectively.

Description KD Validation of BACE in DRG (Hyun, 2416)
Decreased BACE1 expression in DRG following siRNA3 transfection. DRG neurons were transfected with 1 μg siRNA3 plasmid and incubated for 48 hours in 37°C. DRG neurons were stained for BACE1 us¬ing the Anti-BACE antibody . (a,b) Neurons transfected with the control plas¬mid pSUPER-EGFP (green) did not display any changes in BACE1 expression (red). (c,d) DRG neurons transfected with siR¬NA3 displayed reduced BACE1 expression in the axon.
Additional Information
Handling
Storage This antibody is stable for at least one (1) year at -20C. Avoid multiple freeze-thaw cycles.
Dilution Instructions Dilute in PBS or medium which is identical to that used in the assay system.
Application Instructions Immunoblotting: use at 1:500-1:1,000 dilution.